Back when my son Callum (del +) was born, two great friends (Giles Derry and David Drake) kindly agreed to be his godfathers. They probably expected a baptism, a few birthday parties, a wedding, and an excuse to make sure to keep in touch to be the extent of their duties. Now Callum is nearly eight years old and together with Callum’s sister’s godfather (Paul Day) they have also become expert fundraisers in support of Callum and Angelman Syndrome. Every couple of years they come up with some crazy idea about how to raise money and capture potential donors’ sense of adventure and humor to entice them to part with fundraising dollars—and to have fun doing it! They came up with three simple rules to judge whether an idea was good:

Past fundraisers began with a “simple” sponsored bike ride and progressed to a banger car rally across Europe (from France to Croatia) in a car purchased for less than $300, performing tasks along the way. 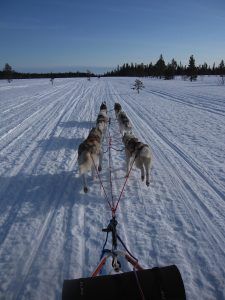 So for this year’s fundraiser, why not go dogsledding in North Sweden at the Arctic Circle? And why not make it a bit more hardcore by turning down the option of cabins at night and instead sleep outdoors in open air snow graves and truly experience the extreme cold conditions and winter nights?

Following the amazing success of past events, and with Callum’s health more stable than past years, I was convinced to join the three others in Yxskaftkalen in Sweden in earlier this year (I still can’t pronounce it properly, but it means Axehandle Mountain). Following some basic instruction, we were each shown our team of six Siberian Huskies who were desperate to get going, and off we went for our three day, 200km trip over mountains, across frozen lakes, and through forests. Sledding for about three hours between breaks, we found that standing on a 2-inch wide metal runner required some significant concentration. We each fell off a couple of times on the first morning going too fast around corners, but following that we got the hang of it! 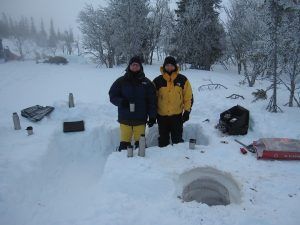 day and ONLY about -30˚C at night. Food was luxurious boil-in-the bag high-energy food, and lots of water to stay hydrated. At night, we each had to dig our snow grave (exactly how they sound—a trench about 3 feet deep in the snow). Whilst very cold, even in about eight layers of clothes, the nights were so still and serene, and the snow not as uncomfortable as it sounds.
After the first night in snow graves, my sledding colleagues’ first comments were about how badly they had slept and asked mehow I had slept. “Much better than an average night at home,” was my response, with not having to get up to attend to an Angel for a night being a luxury for me! No more complaints from them about their sleeping after that… 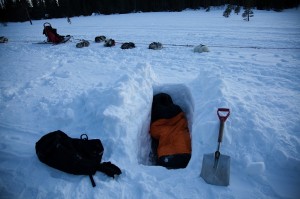 The scenery was simply stunning, we ice-fished for arctic char for dinner, saw almost no sign of human existence during our three days, and were treated to a 90 minute Northern Lights display on our last night while sitting around the campfire after d

inner. Something you really can’t describe in terms of its scale, color and beauty. One of our guides has sledded there for five years and described it as the best display he had ever seen.

A warm shower and a change of clothes were most welcome after three days, and not having to dig for an hour to build your bed was a bonus. It was an unforgettable experience and an opportunity to catch up with friends and they got a thorough update on Callum and all the exciting activities going on in the Angelman world in terms of research and potential therapies. Plans for the next trip are underway—though this last trip will be hard to beat in terms of creativity and adventure for a bunch of daytime desk-jockeys (three accountants and a lawyer). Any suggestions welcome! 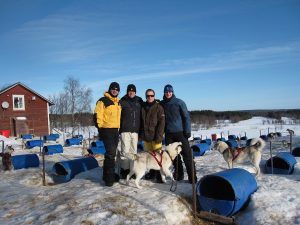 Money raised was divided between UK, Canadian, and US Angelman charities and we were thrilled to make an $8,000 donation to FAST in support of all the ground-breaking activities ongoing.

Alistair Blackburn and his wife Heidi, together with their Angel Callum, and his sister, Keira, live in Oakville, Ontario, Canada. Giles, David, and Paul live with their families in the UK—where Alistair is from.