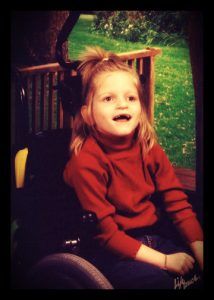 Cindy and I had been together just a little over five years when Jamie was born. We already had a 4-year-old son Luke and a 2-year-old daughter Maddie at home. Life was moving along like a storybook: nice house, good jobs for each of us, and three healthy kids at home.

Even at birth, Jamie just seemed a little bit different than the other two kids. Not “strange” different,  just different. She was a blonde-haired blue-eyed cutie; Luke and Maddie, like the two of us, had brown hair and brown eyes. After a few months Cindy started noticing that Jamie was not reaching the same milestones that the other two had at the same age. I kept telling her “give it time, she will catch up.” But, to her credit, Cindy kept a close eye on Jamie’s progress and was very perceptive of “the little things” that she was doing. Jamie was always getting sick and vomiting, so off to our first of many specialists who first tried changing her formula, adding thickener and eventually diagnosing her with GIRD. The constant to and from to the doctors and specialist started to take a toll on our personal life. Eventually we found ourselves at a marriage counselor, hashing out all the things that we disagreed on. I was so worried that our marriage was  going sour and there was nothing I could do to fix it. We started arguing about what seemed like everything from money to bills to missing work to going to doctors’ appointments.

Then one of the specialists thought they had the answer to why Jamie was failing to thrive; she told us that Jamie had a malformation in the base of her skull that was “pinching” the brain stem and not allowing the fluids to flow properly. Luckily, there was a surgeon in Iowa City that could do a surgery to fix it. We both decided to put our personal problems aside and focus on Jamie. In Iowa City the surgeon makes his patients have DNA testing done. The geneticist told both of us that there was nothing to worry about and that it was just protocol. A few months later, Jamie’s surgery went great and before we knew it she was back home recovering. Weeks after the surgery, Cindy received a call from the geneticist’s office… there was a positive result on the DNA test. She asked what it was, but all they would tell her was that there was a deletion on the 15th chromosome. Now of course as soon as Cindy hung up, she started google searching 15th chromosome and deletion. It had to be Prader Willi or Angelman Sydrome; finally we had an answer… Angelman Syndrome. We had a name to go with what our 1-year-old little girl was struggling with.

Cindy dove in head first, looking, searching, asking questions and demanding answers. I, on the other hand, 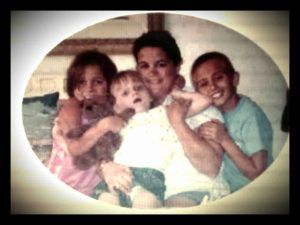 was not so ready to label my little girl “permanently mentally and physically handicapped.” The DAD in me wanted to ignore it, deny it, but finally I had to accept it. Accept the fact that Jamie was and would always be different, that probably would not talk, that she might not walk, that she would never grow up and play sports, or get married. It was a huge blow to take, but Cindy helped me get through it. And you know what? All the problems that we were having and had put aside didn’t seem to matter anymore and for the most part were gone. Jamie and her diagnosis made us put our problems second because her struggles were so much greater than ours.

Over the next few years we still saw many different doctors and specialists, but that was our new normal – it was not that big of a deal. We became a one income household and made some cutbacks, but life was great, considering all the changes we had made. When Jamie was 3, we decided that it would not be fair to Jamie, Luke and Maddie to have any more kids; so I went in and had the “old snip snip” done just to be sure. The crazy thing is a few years later we started talking about kids again, and adoption. We figured we were going to be raising Jamie the rest of our lives, and there were so many kids that needed loving homes that we would look into it. That is how we found Rebekah. Cindy looked on adoptuskids. On a whim, she put Angelman Syndrome in the search bar, and Becca’s picture popped up; it seemed like it was meant to be. We did some research and found out that we had to take classes to be foster-adoptive parents before we could submit court papers to apply for adoption. Within a month or two we were taking classes once a week for 16 weeks to become licensed. Halfway through the classes, we were informed by Becca’s worker that she was being placed in an adoptive home… we were crushed. It might be hard to believe, but we had already started making changes to the home, and we had already started falling in love with her. Cindy and I decided to continue on with the classes because you never know what God has in store for you. Then we found Mekayla who also had Angelman Syndrome, she was also in a foster home and was not going to be adopted by anyone that the worker could foresee. We finished our classes and submitted our home study to Kayla’s worker. That was in August, now we just had to wait and wait…

On September 20th 2006 I had a coworker of mine drive up on my route and tell me that my wife had called and that she was heading to the hospital in an ambulance with my daughter. I was worried, but we had been to the hospital so many times that I was kind of used to it. I met Cindy at the hospital, and the doctors already had Jamie sedated. Earlier that day Cindy was called by Jamie’s teacher; the teacher told her that she thought 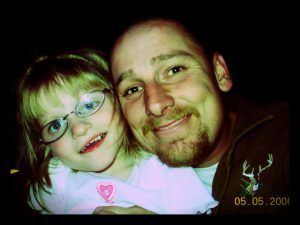 Jamie had had another seizure and that she had collapsed. We had dealt with seizures for many years and that made sense. Two days later we are following a helicopter half way across the state to Iowa City. By the time we got to the hospital, we were told that Jamie had brain swelling and was having multiple strokes. It hadn’t been a seizure like the other doctors had thought. The doctors did everything they could, but it was too late. Early Saturday, October 23rd, 2006, Jamie passed  away in her mommy’s arms, surrounded by her family, a family that loved her beyond expression, and her Daddy kneeling beside her rubbing her hand telling her, “It’s okay, honey, you don’t have to fight anymore.”

Our lives were shattered; my heart was crushed. That same morning we had to drive back home and we had to tell Luke and Maddie that their little sister was gone. We said our final goodbyes to Jamie later that week, in a small corner of the cemetery that Luke had picked out. That same day we received our foster adoptive license in the mail.

Months went by and my heart ached beyond belief (it does still, this very day), I didn’t even want to think about another Angel, let alone adopting one. I took some time off of work after Jamie passed away. On one particular day, I took lunch into the school for Maddie and her friends.

One of Jamie’s friends was in the cafeteria. Her name is Kaitlyn, she also has Angelman Syndrome, but something was wrong. Her one-on-one aide was not with her and the substitute had her sitting at the wrong table without her friends, facing the wrong way. She looked so lost. so Maddie and I went to her table and ate lunch with her. By the time I got back home from the school I was in tears, actually crying like a baby. She was so lost for one day because her one-on-one aide wasn’t there, imagine how lost an Angel in foster care must feel, being moved from placement to placement?  I told Cindy, “Find out what we have to do to proceed with the adoption.” I couldn’t live with myself if I did nothing. A very strange sequence of events followed. We inquired about Kayla again and we were quickly approved for a pre-adoptive placement, a few weeks later we were contacted by Becca’s worker and informed that she had been removed from her adoptive placement because of abuse. We had a long talk with Luke and Maddie, and they asked, “How can you choose one over the other?” – so we didn’t . We decided as a family to adopt both girls. Both girls needed a forever home and a family to love them. The girls have been with us almost 5 years now. We still deal with lots of different doctors and specialist, we are still a one income family, and we love the girls dearly. 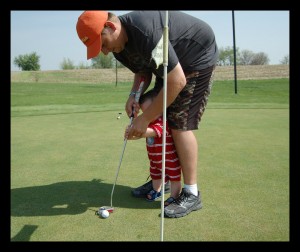 on for the past few years. When we were introduced to The Foundation for Angelman Syndrome Therapeutics “FAST” that is when I knew I had to do it. FAST is an all volunteer organization whose goals are to get kids properly diagnosed, look for possible treatments and therapies for the symptoms of AS,  and hopefully fund future research for a cure. The word “cure” had not been mentioned much in the AS community in past years. FAST is giving parents HOPE that our kids lives could be better some day. That our children some day would talk, walk, run, and not be afflicted with seizures. What better way to continue Jamie’s legacy than to help fund FAST’s mission. A mission that could someday help her little sisters, sister that she never had a chance to meet. Our HOPE is to raise awareness about Angelman Sydrome, and much needed funds for FAST. This year the First Annual Jamie Berkley Memorial Golf Tournament will be held at Toad Valley golf course in Pleasant Hill, Iowa, on September 23rd – Jamie’s Memorial Day. September 23rd is also being observed in the state of Iowa as Angelman Syndrome Day.

Our life has been anything but normal or storybook. Cindy held our family together in  its darkest time, in my darkest time, and I love her more than I could ever put into words. She was our ROCK. Many people 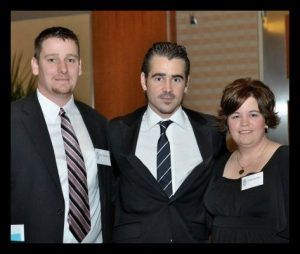 tell me, “Oh that is so cool you are doing the tournament,” but all the credit goes to Cindy. She is the strongest person I have ever met, with a heart with more love and caring  than it should hold. I still think of Jamie every single day. I still tear up from time to time, but most of the time I think of her laugh, her smile, her wet kisses, and how much love she had for everyone. That is a gift I was given for seven years and I will always cherish it. I feel so blessed to have been entrusted with her for the short time she was with us, not too many people will ever know the love of such a pure soul. She will always be a part of our lives and family, and I share stories about her with anyone that will listen. Jamie made such an impact on so many people when she was here on earth, and she continues to do so to this very day…