Road Map to a Cure

The Foundation for Angelman Syndrome Therapeutics (FAST) is focused on funding research that will lead to a cure for Angelman Syndrome (AS).   There are almost half a million people worldwide suffering from AS, a single gene disorder that affects speech, cognition, movement, balance, sleep, and behavior and, in most cases, causes life-threatening seizures. Individuals with AS require continuous care and are unable to live independently. 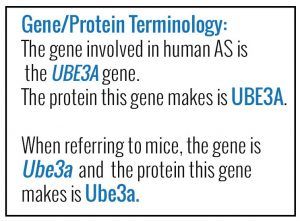 We know exactly what causes Angelman Syndrome in individuals – the function of one gene inherited from the mother,maternal UBE3A, is non-functioning. The copy of the UBE3A gene inherited from the father is present in everyone, but is silenced in the brain due to a genetic mechanism called imprinting. The fact that UBE3A is imprinted plays a very important role in the path to a cure. We know that loss of maternal UBE3A does not affect neuronal development, only neuronal function and we have evidence that neuronal functionality can be restored. Angelman Syndrome has been cured in the laboratory using four separate strategies ; drug activation of the paternal gene, protein replacement therapy, gene therapy and biologics. Cognitive and motor delays have been reversed in adult Angelman mice, suggesting that human therapeutics can achieve results at any age. 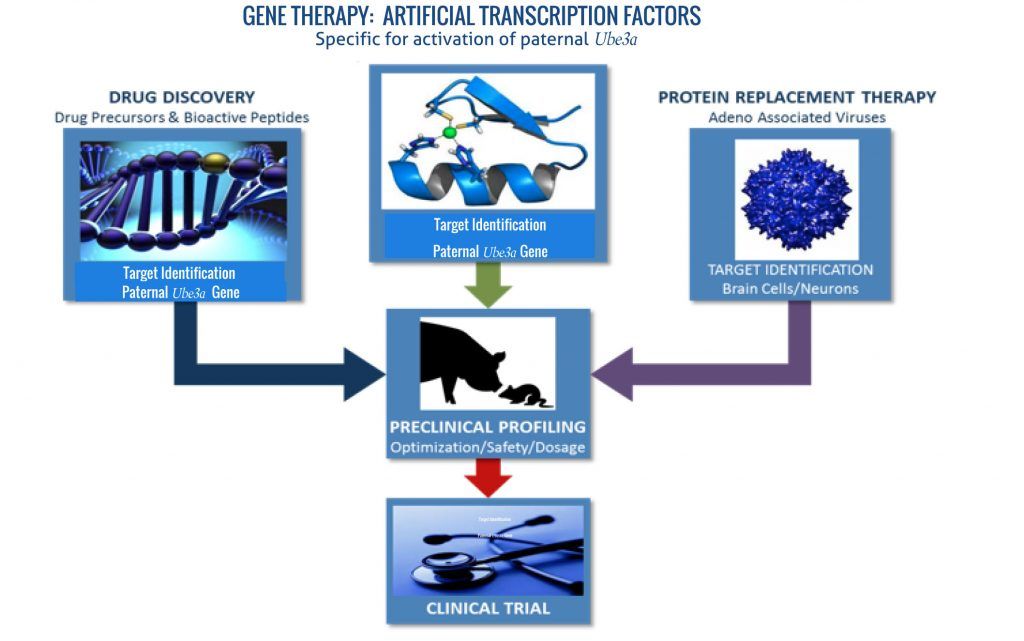 FAST proposes that with $20M, a cure for AS is achievable within five years. Each of these strategies is purposefully designed to bring therapeutics to human clinical trial in the most efficient and expedient manner possible. Timelines and costs represent bringing therapeutics to the point where pre-clinical validation can occur.

Figure 1. FAST Is Leveraging Multiple Paths to Identify a Cure in the Most Cost Effective and Rapid Methods Possible.

FDA and Near-FDA Approved Drugs -Identify pharmaceuticals that are, or are in the process of being, FDA approved. This category of drugs represents those that have passed rigorous testing for safety and tolerability and most have known mechanisms of action.  Several potential drugs will be tested to determine their effectiveness in AS animal models to treat the 5 major areas of AS symptomology: Seizure control Cognitive rescue Motor coordination and movement Sleep patterns Synaptic function and neuronal morphology

Identify small molecule precursors, proteins, or bioactive molecules to activate the silenced paternal Ube3a. We have employed a collaborative approach with different, yet complimentary, drug libraries and reporter / detection strategies to accelerate discovery. Collaborative cross-validation will reduce false positive results and time-consuming parallel paths of redundant pre-clinical development. We will share positive results to further expedite the discovery and validation by enabling concurrent evaluation of like drug/protein structures and families of small molecule precursors by multiple research groups.

Animal research on the adult AS mouse model has shown proof-of-principle that gene therapy can reverse symptoms of AS. Specificity of this approach reduces potential negative side effects and increases likelihood of broad therapeutic benefit. We will engineer zinc finger-based artificial transcription factors to activate the paternal UBE3A gene. A FAST-funded scientist has developed zinc finger-based artificial transcription factors that cross the blood-brain barrier and promote widespread activation of the silenced Ube3a gene in the brain of the AS mouse model.

Bioengineered Viruses (Adeno-associated viruses or AAV’s) are now available to alter specific populations of neurons. These viruses can be used to replace the missing UBE3A gene, or turn certain cells into UBE3A protein factories to deliver to the rest of the neurons in the brain. A FAST funded scientist has already shown that recovery of the adult mouse model is possible using an AAV strategy. A FAST funded scientist has engineered an AAV to create Ube3a protein-producing cells and target the protein to be distributed throughout the brain. This strategy received Orphan Drug Designation from the FDA in 2015.

A cure for Angelman Syndrome will have a tremendous impact on society at large.

The gene that causes Angelman Syndrome has been linked to several other diseases and genetic disorders involving learning and memory and stands to be the gateway cure for many other devastating conditions.

Angelman Syndrome involves one of the most severe types of and one of the few known genetic causes of epilepsy. Because we know exactly what causes AS and have already cured it in the laboratory, an investment in FAST is an investment of global proportion.

You will realize a miracle in your lifetime…for millions of people around the globe.