Angelman Syndrome was first described in 1965 by Dr. Harry Angelman, and it was not until 1987 that it was recognized to be due to a microdeletion, or defect, on chromosome 15. In 1997 the gene UBE3A was identified to be associated with the condition of Angelman Syndrome. 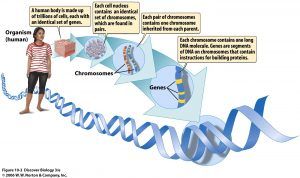 that provides the instructions to produce proteins in the cell.  A set of DNA instructions for a single protein is called a “gene” and these instructions are made by a process called transcription.  Within a pair of chromosomes, you will have two copies of a gene that differ from each other in small ways.  These differences are called gene variants or “alleles”. Thus, you can have variants in a particular gene based on whether the gene was inherited from mom (maternal allele) or from dad (paternal allele), or based on the ancestral origin of that particular set of DNA instructions (an allele of European descent or Asian descent).

In terms of Angelman Syndrome, the UBE3A gene is present on each chromosome 15 in the pair; one chromosome has the maternal allele while the other has the paternal allele.  The vast majority of cells in your body do not care if the UBE3A allele is maternal or paternal, and make UBE3A protein using the instructions, or transcripts, provided by both alleles.   However, neurons are special.  It just so happens that in neurons instructions to make UBE3A protein are only made from the maternal allele of UBE3A.   It is “silenced” on the paternal strand, meaning the instructions are not produced (transcribed) from this copy of UBE3A.

The paternal allele is silenced by the presence of a strand of nucleic acid produced from the paternal chromosome that is known as the “antisense transcript (ATS)” or UBE3A-ATS.  It is called “antisense” because the instructions for the UBE3A-ATS are produced by DNA instructions that are read in the opposite direction as those that would produce UBE3A.  Production of the UBE3A-ATS prevents UBE3A instructions from being made (transcribed) from the paternal allele.  Exactly how the production of the UBE3A-ATS blocks transcription of paternal UBE3A is still being studied.  Overall, the process of using one allele of a gene based on whether the allele is maternal or paternal is called “imprinting”. It is important to remember that the imprinting process for UBE3A only occurs in neurons in the brain (nerve cells). This means in other cells of the body the paternal allele of chromosome 15 produces (or expresses) the UBE3A transcript and protein, since the UBE3A-ATS is not expressed. 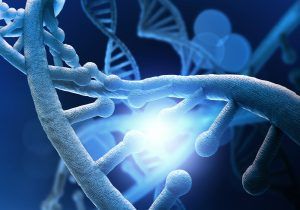 Therefore, if there is a problem in the UBE3A gene on the maternal allele, the only one that is transcribed in neurons of the brain, then functionally the brain does not have the ability to use this gene and make UBE3A protein.  Angelman Syndrome results if the maternal allele is either deleted (deletion positive), mutated (UBE3A mutations), imprinted incorrectly to look like the paternal allele (imprinting disorder or imprinting center deletion – ICD) or there is no maternal allele and the person has 2 paternal alleles which are both turned off (UPD or uniparental disomy).  Deletions are usually random, but in rare cases can be inherited (if mom has a rare situation called a Robertsonian translocation or chromosome rearrangement).  Mutations can occur in the egg (called de novo) or can be inherited by the mom from her father.  For information on how to test for different genotypes, click here.

It is important to remember that most of these defects are present or occur in the mother’s egg while it is being formed.  Those eggs are formed while the mother herself is being made in her mother’s uterus! Most cases of Angelman Syndrome are due to random events that occur during the development of the egg within the developing ovary, and are NOT the result of anything the mother did during the pregnancy of the child with Angelman Syndrome. The egg had this defect before you (mom) were even born.  In the case of UPD, the fertilized egg may recognize that it only has one chromosome 15 and not a pair.  This would be fatal to the embryo, so the egg copies the chromosome 15 that is present to make a pair.  If the chromosome that is copied is the paternal chromosome, Angelman Syndrome results because neither chromosome will transcribe UBE3A since both alleles are recognized as paternal.  This again, does not happen because of anything the mother did or experienced during pregnancy, but in fact occurred at the time of fertilization in order to rescue the embryo and allow it to survive.

The UBE3A protein has multiple functions, many of which are not yet understood completely.  You can think of proteins as ‘machines’ that have specific jobs to do.  The main job for the UBE3A protein is in a process called ubiquitination.  UBE3A acts in a complex with other proteins to “tag” proteins in the cell to be taken away for degradation and recycling.  The tag itself is a small protein called ubiquitin (named so because of its abundance in cells).  Since UBE3A adds, or ligates, ubiquitin to proteins, the UBE3A machine is referred to as an ubiquitin ligase.   Thus in neurons lacking UBE3A, proteins can accumulate to high levels that can have a negative effect on neuron function.

UBE3A protein has other jobs we know of as well.  Adding ubiquitin to a protein can also regulate how that protein works, instead of targeting it for recycling.  So, UBE3A can tag other proteins and potentially make them more or less effective at their jobs depending on the needs of the cell.  We also know UBE3A can work with other proteins to control the transcription of genes from DNA which may be independent of its work with ubiquitin.  Ultimately, understanding what the critical functions of UBE3A are in neurons will help us understand why neurons function poorly in the absence of UBE3A causing Angelman Syndrome.

By understanding this physiology it is easier to understand where the science is being focused to discover therapeutics that might help our loved ones with AS. A few of the current approaches to therapeutics include:

2011: Viral vector was used for gene therapy to rescue the AS phenotype in mice5

2011: Topotecan was found to turn on the paternal UBE3A gene6

2015: ASO (antisense oligonucleotide) found to turn on the paternal UBE3A gene by turning off the production of the UBE3A-ATS7

In upcoming blog posts, Allyson Berent will summarize the current progress of the FIRE Initiative towards therapeutics.  Videos to accompany this post and upcoming posts are available on the FAST youtube site.