When we refer to gene therapy in Angelman Syndrome (AS), we are typically referring to a “viral delivery” or “virus vector” of the missing gene (UBE3A) or the missing protein (UBE3A protein) into the brain. AS is caused when the UBE3A gene is either missing or not functioning properly; replacing this gene or protein is expected to reverse many of the symptoms of Angelman Syndrome.

Dr. Edwin Weeber and his lab have been successful in replacing the UBE3A gene in ADULT mice; therefore, there is evidence to support that this strategy will be effective in humans as well. There are many questions in the Angelman community about the implications of gene therapy, as well as requests for a simplified explanation of the strategies.  We hope the following information begins to address some of these questions.

For those that have not yet seen this segment recently aired on CBS Sunday Morning, please take a moment to watch it. This segment features a different genetic disorder that was cured with gene therapy…yes cured!

Agilis Biotherapeutics is working as expeditiously as possible, with Dr. Edwin Weeber, to bring a gene therapy for the treatment of Angelman Syndrome to human clinical trial. See a summary of their talks from 2015 FAST Gala here.

Additionally, there are dozens of neurologic disorders that are either preparing for, or are already in, human clinical trials.  We are not the first and we certainly will NOT be the last.  FAST is aggressively pursuing multiple strategies using gene therapy technology to develop treatments for Angelman Syndrome, including considering multiple vectors, as well as various modes of delivery.  We are looking for the BEST, the SAFEST and the most EFFICACIOUS method. 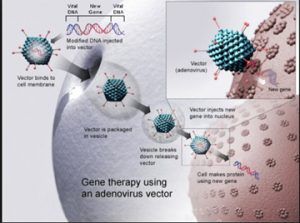 A virus is modified so all the disease-causing elements are removed. The missing gene in Angelman Syndrome, UBE3A, is then placed inside this “safe” virus so that this virus can act as a vehicle to transport the UBE3A into the brain, where UBE3A is missing. The virus that has been used in Angelman Syndrome is AAV (associated adenovirus). In the CBS Sunday Morning segment, they used a lentivirus (HIV). The lentivirus is modified so that it no longer carries the HIV disease.  The virus is used as a delivery vehicle (like a car) to get into brain cells. Once the virus is inside the brain it injects the gene into the brain cells (neurons) to produce the missing protein.

This approach has been used for various genetic disorders such as inherited blindness (awaiting FDA approval), SMA, Cystic Fibrosis, DMD, MPS, MLD, Batten Disease, San Filippo Syndrome, AADC, SCID, and others.  In the last decade, gene therapy has been shown to be effective and safe.

FAST is working to have several gene therapy approaches ready for human clinical trial within the next 24 months.

Be ready to hear more about this at the FAST Science Summit on Friday December 2, 2016 in Chicago.