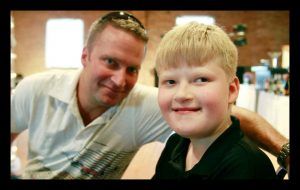 I don’t think a day goes by when a board member of FAST isn’t asked why or how we volunteer so much of our time and energy to this organization.  The answer is simple:  we are honored to represent our extraordinary children and their equally extraordinary family and friends.  I am humbled to share with you a correspondence FAST received about two members of our community, Jeff Mears and his son Colton.~ FAST Chairperson, Paula Evans 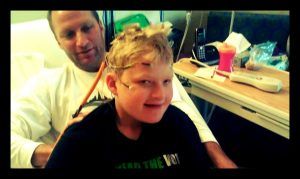 Our family learned about your organization through a brief encounter with Mr. Jeff Mears, a wonderful man who has a son Colton who is diagnosed with Angelman Syndrome. My mom and dad were taking the train to Chicago on a weekend getaway with friends.  My mom, being the very outgoing, friendly person that she was, struck up a conversation with Jeff at the train station before the train arrived.  In that conversation, Mom and Dad both learned about Angelman Syndrome, as Jeff explained he was going to Chicago to attend a conference, and he told them all about Colton, his angel.  When the train finally arrived, they said the usual, “it was nice to meet you” and “have a wonderful time in Chicago” pleasantries, and boarded the train.

Later that afternoon, very unexpectedly, my mom suffered a massive heart attack.  Jeff happened to be the first to respond to the call on the train intercom, and was holding her head and talking her through the pain as passengers who were doctors and other first responders came to her side.  He was with her the entire time and was very instrumental in her care until the medics arrived.  An ambulance met my mom and dad at an intersection where the train stopped, and both were whisked away to a hospital.  Sadly, the doctors could not revive her, and she passed away that afternoon.

At the funeral, my sister, dad and I were wrapping up our goodbyes with friends and family at the church, and noticed someone that didn’t look familiar.  My dad approached him, and Jeff introduced himself as the man who assisted my mom on the train.  My dad’s eyes welled up with tears and we all hugged him, as he was probably one of the last persons to speak with her.  Jeff brought his son Colton.  It was very comforting to met him, and shake his hand, and all I could think of is how my mom would have loved to have met Colton.  Jeff went out of his way to find us after hearing that the passenger on the train later passed away at the hospital, and through a little ingenuity and Facebook, he was able to drive up to Wisconsin and meet us at her funeral.  It’s strange how in life you meet certain people that will have a tremendous impact on you the rest of your life, and I think we have a forever friend in Jeff.

We would like to make a donation to FAST in memory of my mom, Sally.  While this is a relatively small amount, we hope that it will make a difference in the lives of families affected by Angelman Syndrome.  We would have never known about this condition had it not been for my mom Sally and Jeff to strike up that conversation in the small train depot.  We would love to help out an organization that means so much to Jeff and that could in some way help him and his family.

Attached you will find a check in the amount of $1000.00. Once again, I hope you will be able to make good use of this gift.